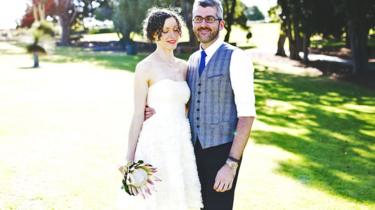 Lindsay, 36, a writer from Kent, and her Australian husband Glen, 38, first tried living without plastic in 2012. It started out as a month-long challenge so turned into a way of life for the pair who live in Perth, Western Australia. “I’m more the driver than him but we got involved at the same time,” she says. “I’m the one that puts in more work but he agrees with all the values.” So going plastic free for their wedding, in 2014, was a no-brainer. 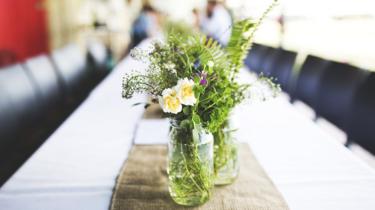 Plastic finds way into weddings in many forms of food storage, drink packaging, decorations, flower delivery – that’s just the start. For Lindsay, who blogs about living without waste, trying to make her special day plastic free came first ahead of any other wishes. “We said we want to be plastic free ‘how can we do that,’ rather than saying, ‘We want roses, we want to have canapes, can we do plastic free memorable but not break the bank. Simplicity was key. To me simple means no fuss and devoting whole weekends to projects was out, says Lindsay. 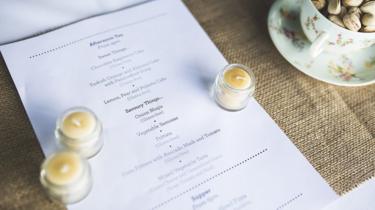 Involving suppliers from outset was the most effective way of making a plastic-free event happen, she says. “It’s really about having conversations with people and explaining why you want to do it. People are willing.” But its about taking matters into you own hands. “If you get stuff delivered to you, that’s when it comes in packaging. It was making sure on the day we went to all the deli, the bakery et cetera so we could guarantee there was no packaging.” Eco Wedding Styles done includes recycled materials. 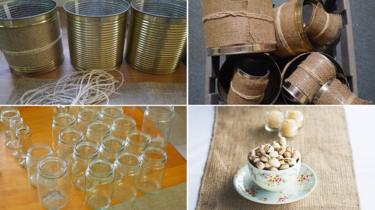 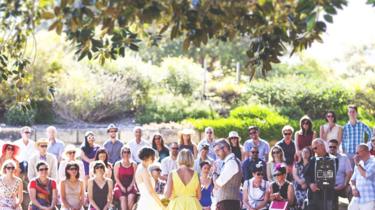 Lindsay and Glen married local bowling club in Perth Lindsay accepts achieving a 100% plastic-free wedding also meant relying on other people. For wedding, they hired a pizza oven and used a local deli to provide fresh ingredients without plastic packaging but did they know what went on behind the scenes? “It’s possible some plastic that I didn’t see… whether he got a packet of salad in a plastic bag, I don’t know were counterbalanced by air miles required to fly her family albeit just four people to Australia. “In hindsight, I should have fallen in love with the guy in the village – but I didn’t,” Lindsay jokes. “I fell in love with a guy in Australia, so it’s one of those things you have to compromise. My parents, my sister and brother flying out for a wedding – it’s a one-off.” They did decide to have the wedding as local as possible in the city of Perth, rather than the countryside, to reduce driving distances. How difficult for Eugenie to achieve? Wedding planner Katrina Otter says working with the right people is key, as some of the more “old-school suppliers” are less keen to adapt. “Make sure you have the right team on board, work with a team willing to do it or one where it’s already part of their ethos.” She adds: Bride and groom might not know plastic involved cutlery wrapped in cling film. No royal wedding is complete without a vibrant floral display. 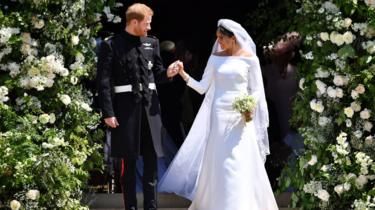 Flowers were a big part of the Duke and Duchess of Sussex’s wedding day And, traditionally, a key part of those has been the floral foam – the bricks of green, spongy foam that provide a foundation for floral arrangements, as well as a water source. Katrina says finding an alternative to the non-biodegradable plastic material has become a big issue for the industry and many florists are looking to do it another way. The florist who created the displays for the Duke and Duchess of Sussex’s wedding, Philippa Craddock, says she didn’t use any floral foam for their big day. The number of couples requesting plastic-free weddings is on the rise, says Katrina, although it remains a small proportion. Another issue to consider for any bride having live TV coverage is the hair and make-up. Kate Arnell, who blogged about her zero-waste wedding, in 2014, says she found it tricky to find plastic-free make-up and hair products. There are a lot more available and since swapped to plastic-free alternatives she says. Whether Princess Eugenie opts for Lindsay’s bicarbonate of soda, vinegar concoction on hair yet to be confirmed. Eugenie wedding wants plastic free on big day. In addition to venue, food and drink, music, the dress, hair and make-up, a bride’s checklist goes on. And also Princess Eugenie added another factor into equation her wedding to be plastic free. The Queen’s granddaughter, who is marrying Jack Brooksbank on 12 October, told British Vogue the couple’s house was anti-plastic and want our wedding to be like that as well.” So how realistic is it? Lindsay Miles discovered, there are quite a few things to take into consideration. If it is just one day, why bother? “A wedding is such a significant day that it’s even more important to be true to your values than on any other day,” says Lindsay. “You can’t go back on your values just because you’re getting married.”

Garden Of Gethsemane Pictures Jesus’ intense moments of prayer before His betrayal, trials and Crucifixion. Garden of Gethshemane has the contemporary features of Living Bible Garden visited by millions each year. Biblical garden design for indepth reflection inspiration and information about Jesus’ life on the earth to see. This beautiful magnificent garden connects people with a presence of God. This Garden of Gethsemane also functions as an important place located in Israel for pilgrimage to walk in the footsteps of Jesus to develop faith experience to grow spiritually. 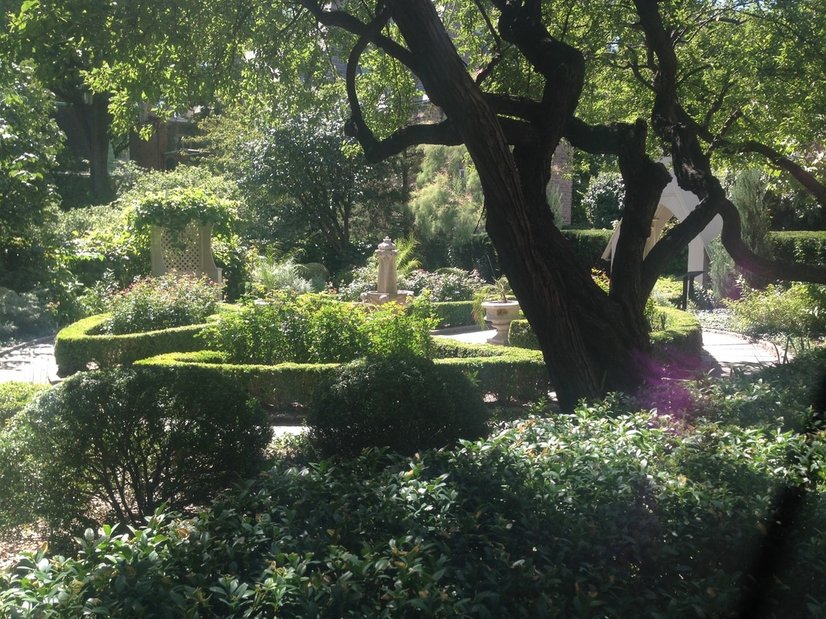 St. John’s Divine Biblical Garden (Manhattan, New York City: 1973). The Biblical gardens are attractions that are primarily or exclusively cultivates the plants, flowers, trees, and herbs named in scripture. Serves as devotional and pedagogical spaces to mobilize sensory experience to build an affectively rich relationship with God of the Bible. 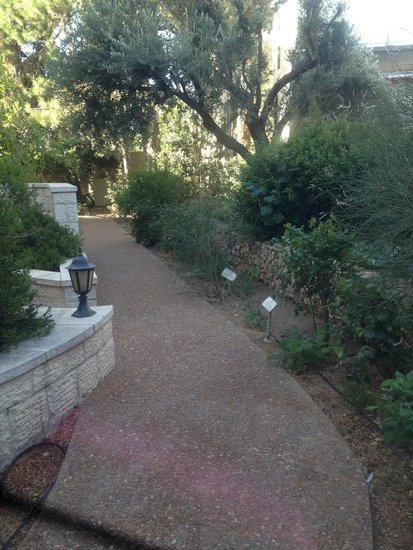 St. George’s College biblical garden is in Jerusalem, Israel founded in 1990. This garden invites you to walk through the natural world of scripture: experience the aromas, textures, sounds and tastes of biblical flora. A Holy Land pilgrimage promises to walk where Jesus walked so biblical gardens offer fragrant aromatic smell of flowers and fruits as Jesus did. 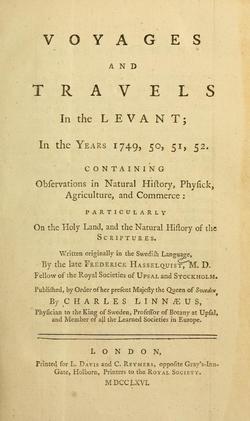 The modern biblical garden emerged from unexpected origins. Garden imagery features heavily in scripture, and there is a rich history of monastic gardens, but these gardens trace more directly to early botanical science. A student of Carl Linnaeus spent years collecting plant specimens throughout Levant. Though Frederick Hasselquist died on his journey, Queen of Sweden and Linnaeus saw to publication of his work in 1757, the first major account of scriptural landscape and flora. 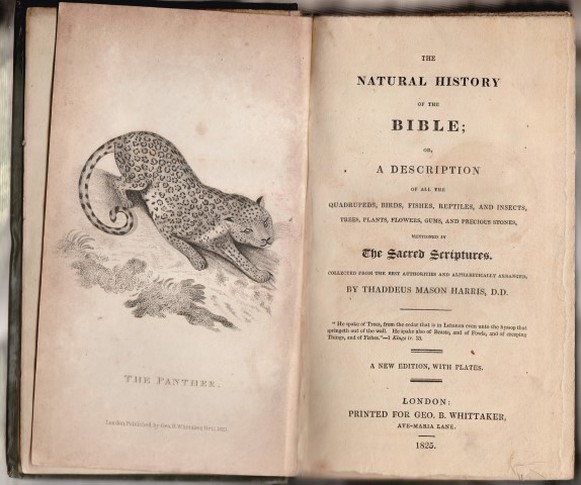 In 1820s, theologians began publishing encyclopedic accounts of biblical flora and fauna. In the first of these works, Unitarian minister Thaddeus Mason Harris writes, inadequate knowledge of natural history “prevents us from discovering propriety of many allusions to their nature and habits, and conceals from us the beauty of many similies founded on its characteristic qualities” 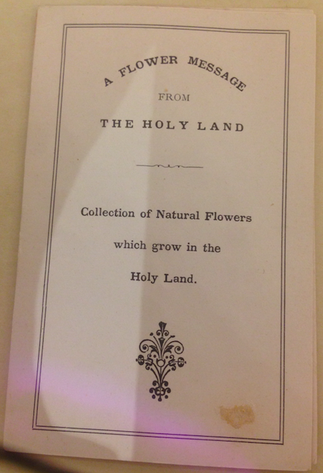 ​As travel to Palestine increased after 1850, natural materials were put to new uses. A popular strategy was to send greeting cards with dried Holy Land flowers attached. The example pictured comes fromAmherst College Archives’ Emily Dickinson collection. Between 1856 and 1886, a childhood friend of the poet sent her a series of “Flower Message from the Holy Land” cards. 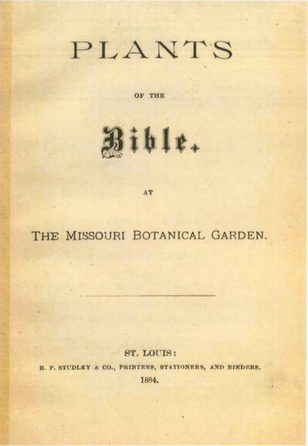 Our first evidence of this natural history corpus used in a garden context comes from 1884. The Missouri Botanical Garden (founded 1858), which still todayfeatures a “Biblical plants” section, published this guidefor visitors to locate biblical flora while walking grounds. 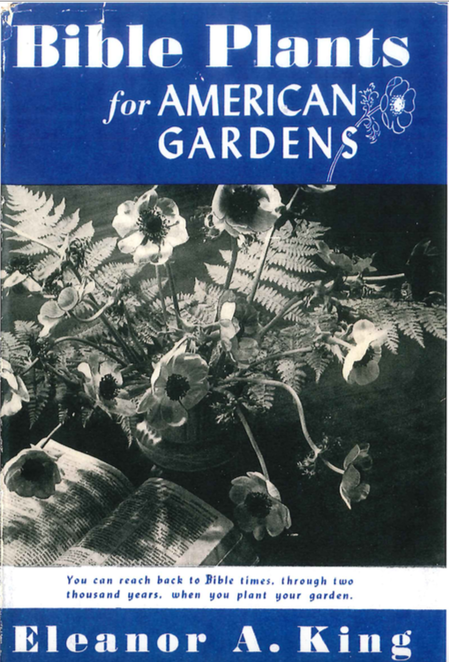 ​The modern biblical garden was fully realized by the 1940s. Eleanor King’s 1941 book was a watershed moment, the first popular book to explain which species to plant, how to cultivate them, as Harris did in 1820s) emphasizing their ability to enhance biblical literacy. 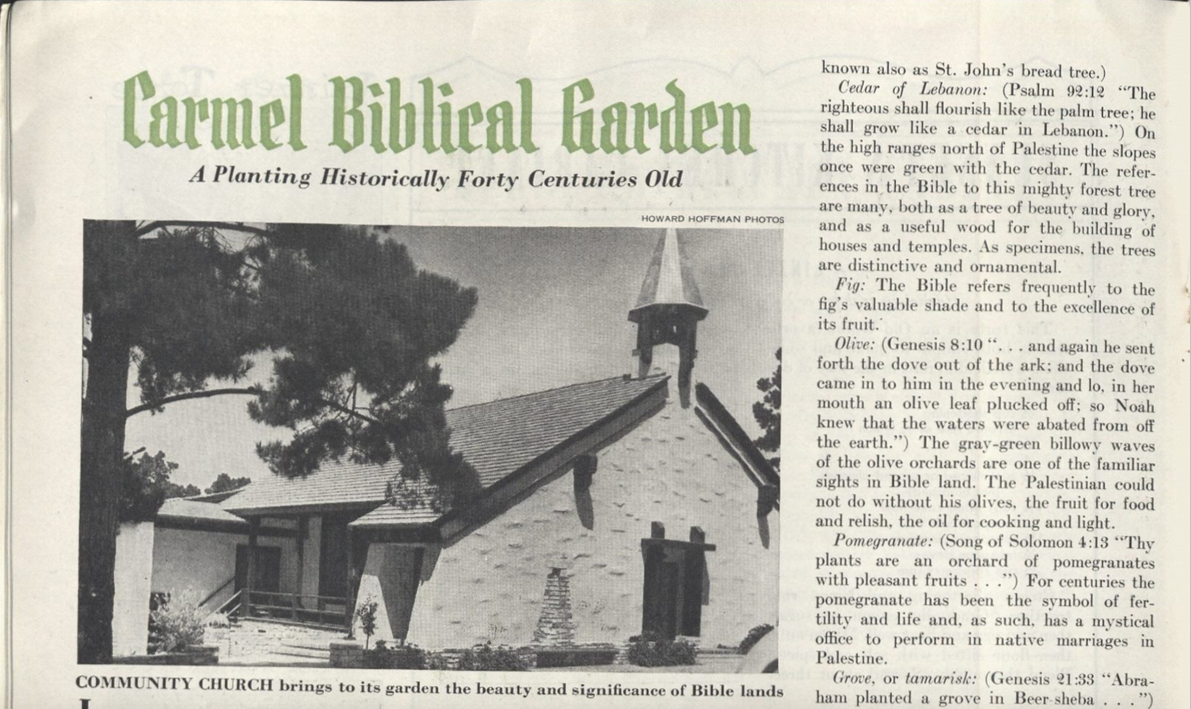 The first verified biblical garden comes from a Methodist church in Carmel-by-the-Sea, California. It was featured in this 1941 Sunset Magazine story. In 2017, there are at least 175 extant gardens in 25 different nations. Most are connected with local congregations, but are found in botanical gardens, public parks, cemeteries, grade schools, universities, and museums. Majority are Protestant (49%), but also Catholic, Jewish and the public biblical gardens. 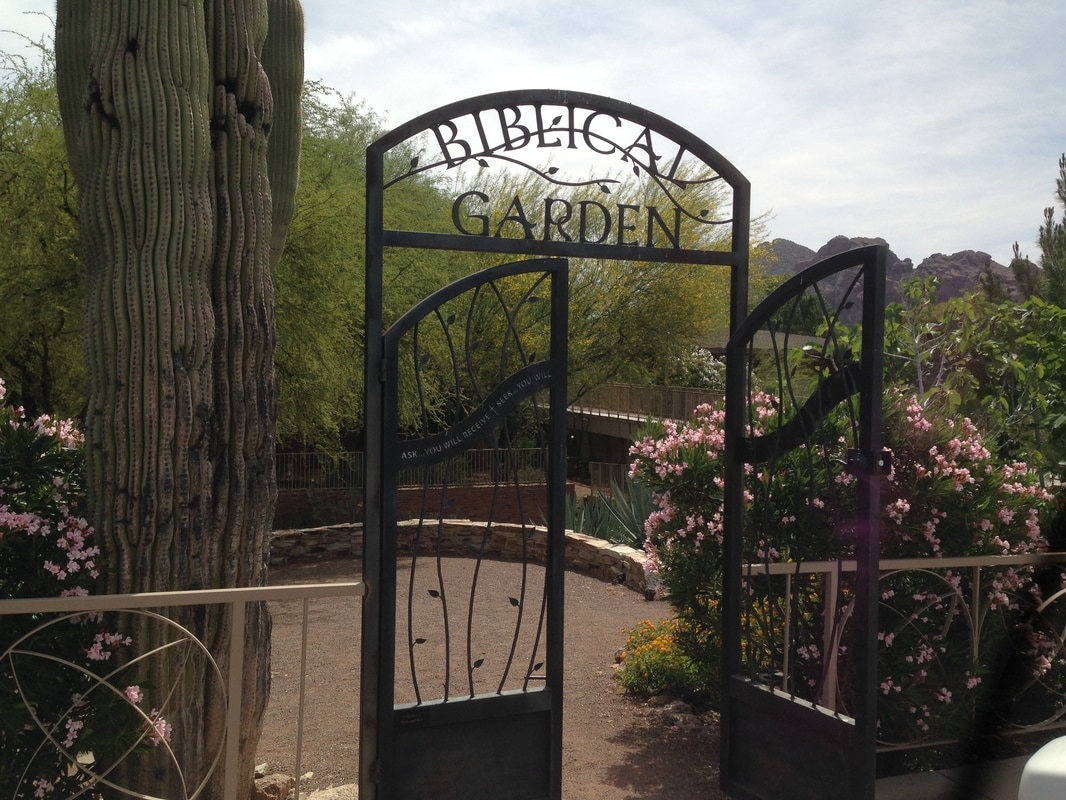 Paradise Valley United Methodist biblical garden Paradise Valley, Arizona founded in early 1960s. Signage onsite teaches visitors about planted species and roles in scripture. Many gardens print detailed guidebooks, such as this one from a United Methodist garden in Fredericksburg, Texas. (Our thanks to garden creator and caretaker Peggy Benson for providing a copy.) 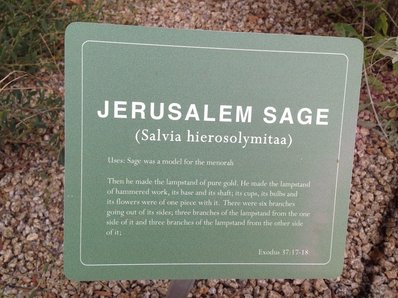 Agritopia Biblical Garden and Gilbert, Arizona founded in 2003. House of God has vessels of honour and dishonour. A tree or plant of honour teaches lessons of life to emulate or to avoid. Judas tree is reminder to seek repentance because Moses, King David and Peter forgiven by Jesus and called serve God despite a past mistake. 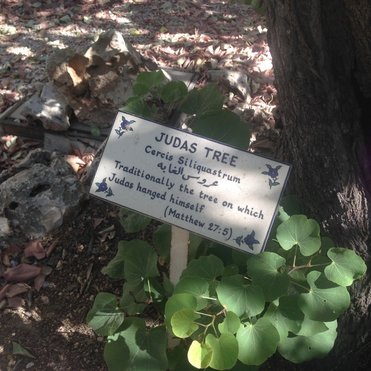 St. George’s College and Most gardens around the world integrate garden art in different media. This carved wooden Noah’s ark miniature is displayed at a Catholic garden near Split, Croatia. 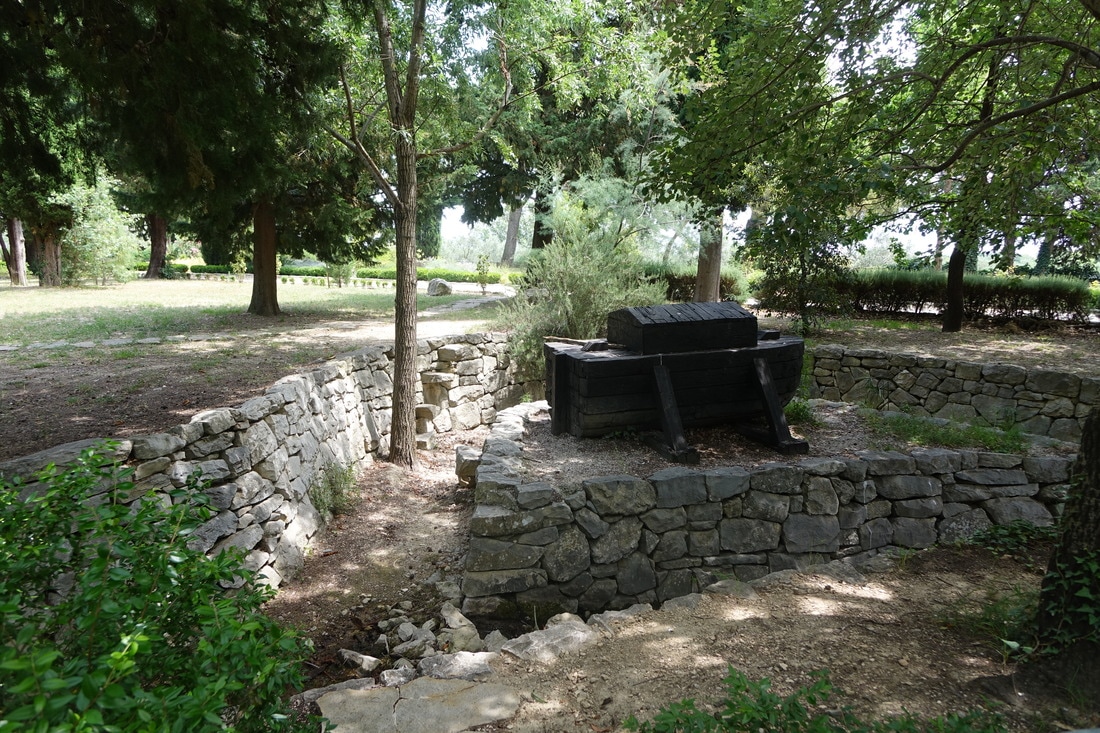 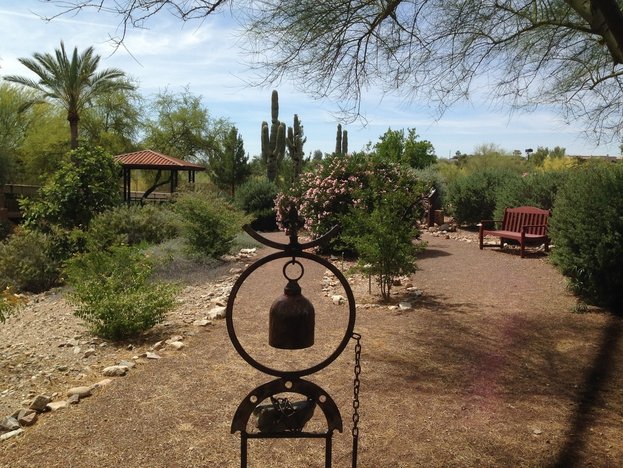 Along with art, the two most common features of biblical gardens pathways and benches. Experiential invitations, insist garden not gazed on from the outside or hastily consumed. They are designed to be moved through and lingered in. The United Methodist garden in Paradise Valley, Arizona integrates aural effect of a prayer bell. A memorial garden of Jesus burial tells us to mourn with hope of Resurrection. 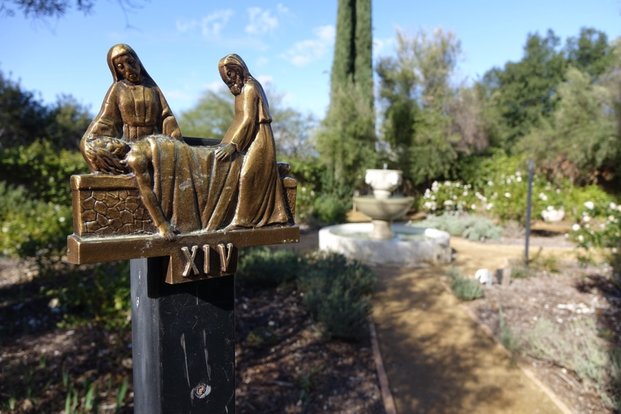 As devotional spaces, biblical gardens commonly mobilize other forms of prayer. An Episcopal garden in Simi Valley, California integrates a walking Stations of the Cross into experience of prayer labyrinth sits adjacent to the garden in Paradise Valley. 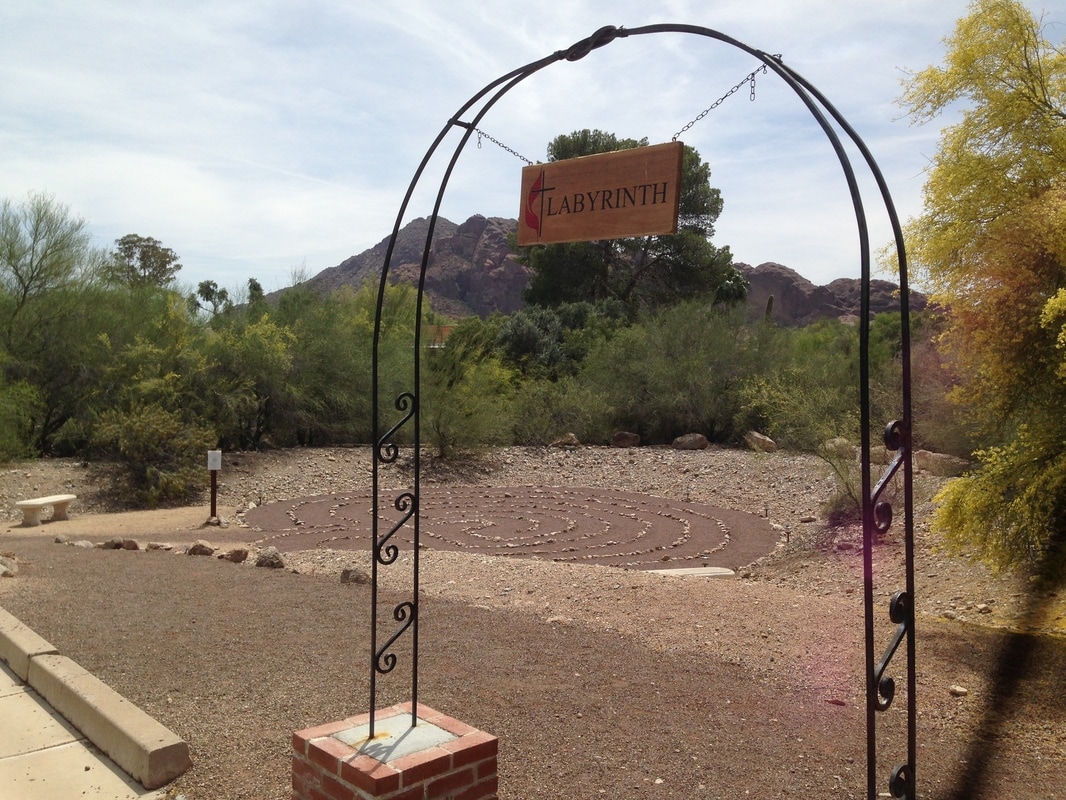 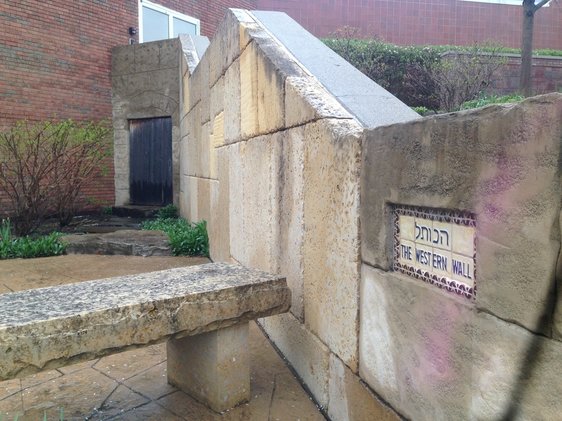 A Reformed Jewish garden near Detroit, Michigan includes a replica of Western Wall. As with the original in Jerusalem, pray-ers write their prayers on small slips of paper and insert them into the replica’s crevices. 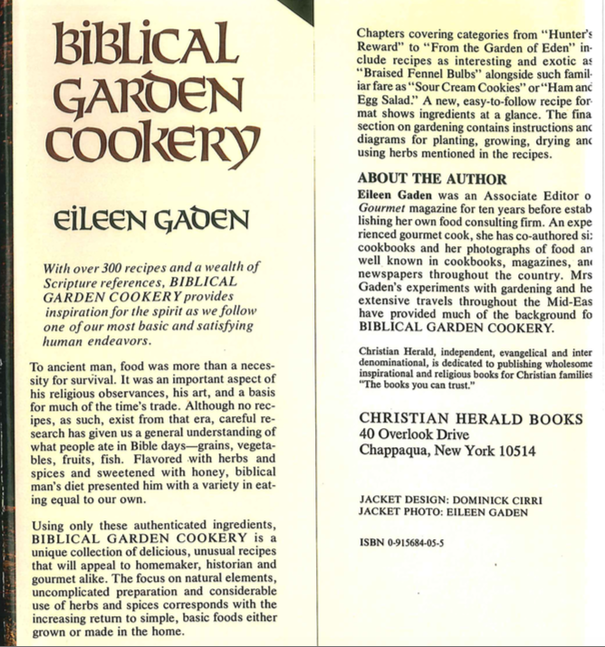 Given their multi-sensory quality, biblical gardens lend themselves to trans-medial innovations. Garden cookbooks, such as this 1976 example, expand the possibilities for using the body to build an affective bond with scripture. Embodied techniques of devotion and pedagogy via biblical flora continue with this 1996 guide to cross stitching and 2003 quilting book. 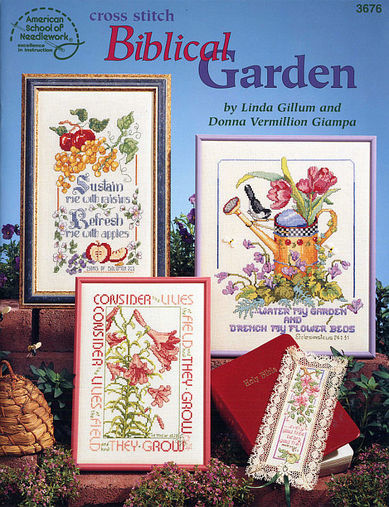 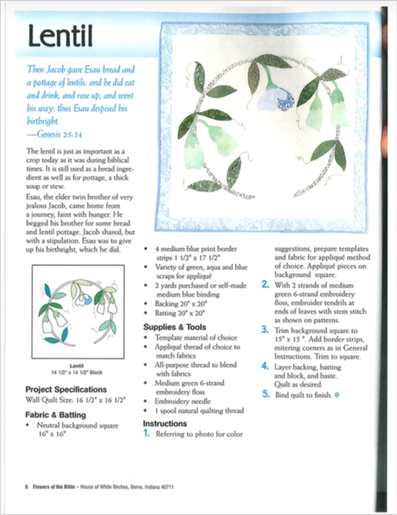 Like homespun, hand wrought crafts “plants of the Bible” playing cards keep scriptural flora close to the body, shifting the frame from art to game. 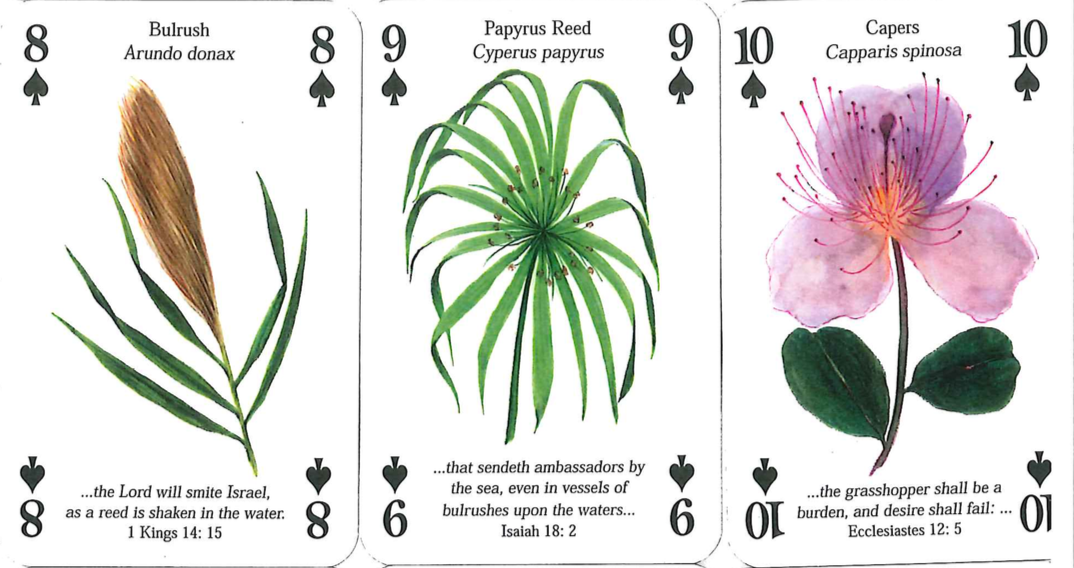 The tactile, aromatic, and attentive engagement with scriptural flora is marketed for all ages, as with this biblical herb garden terrarium: “ages 4 & Up.” 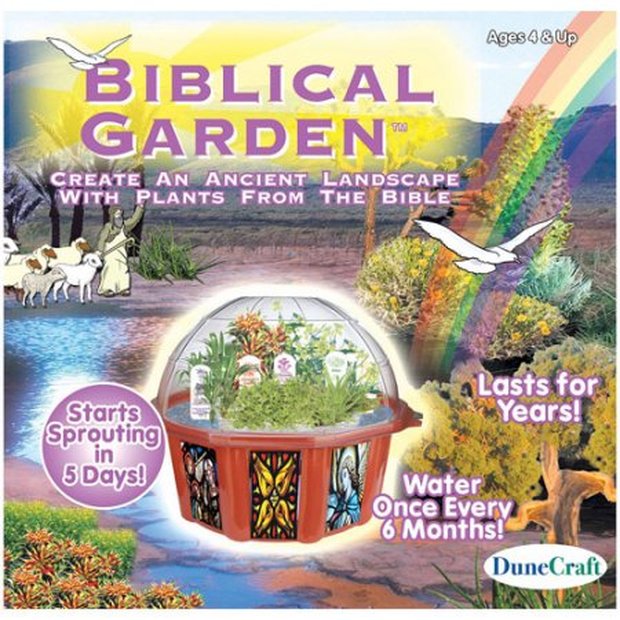 To locate gardens around the world, and perhaps one near you, explore the green pins on global map of attractions. 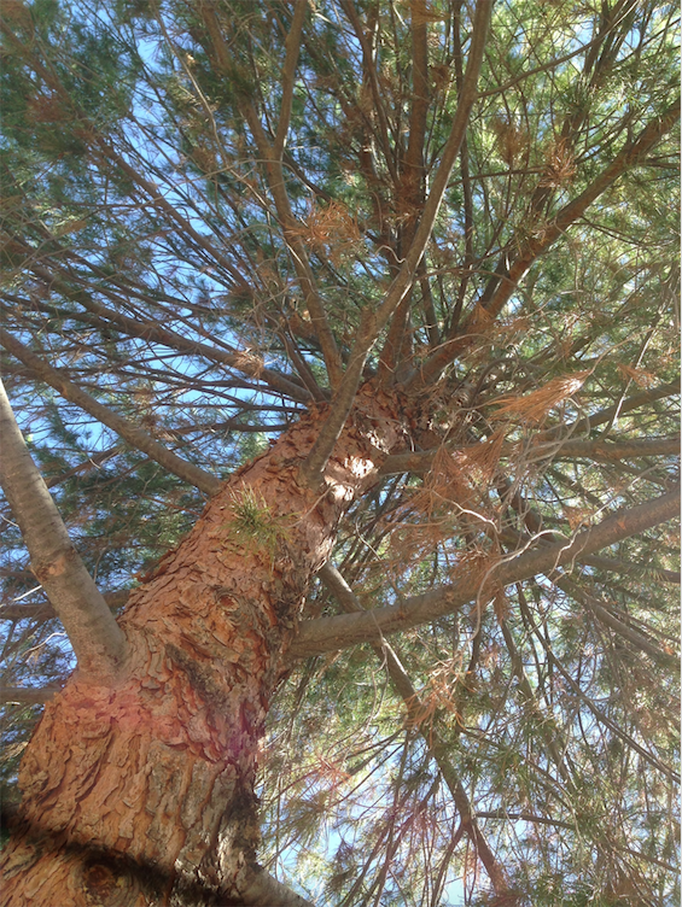 At base of an Aleppo Pine, Beth Israel biblical Garden (Scottsdale, Arizona) — founded: 2012.
Reblogged and Updated