Picture this – you’re in the cinema watching your favourite Disney movie, Sleeping Beauty, but the character’s look oddly familiar to you and your boyfriend.

The Prince then proposes to the Princess, you turn to your side – and your boyfriend is down on one knee with a ring.

This fairytale moment (literally) was created by filmmaker Lee Loechler when he proposed to his girlfriend Sthuthi David, a cardiologist.

He rented a cinema room filled with their friends and family, played the film and popped the question – and thankfully she said ‘Yes.’ It’s not every day you get to propose to your High School sweetheart. For the past six months I’ve been working with @kaylacoombs to animate @stutzd4 and myself into her favorite movie, Sleeping Beauty. The only thing better than seeing the smartest person I know completely dumbfounded was knowing we’d get to live happily ever after together. ❤️ Enjoy!

“When Lee first sent me an email saying he had a proposal idea for his girlfriend, I thought he just meant a Disney-style portrait of the two of them,” says Australian illustrator Kayla Coombs, who worked with Lee for six months to recreate the 1959 film.

Kayla says that after months of late night Skype calls “it was really, really satisfying to see in the video that Sthuthi picked up on a lot of the little things that we did.”

Even details like the way Sthuthi furrows her eyebrows and looks at Lee when she’s confused were put in the cartoon.

“This is probably the biggest personal commission that I’ve ever done, it was just awesome – a pleasure to be a part of,” says Kayla.

The video has gone viral, with more than 1.5m views on Youtube and Twitter seems to love it. Marriage proposals seem to be getting bigger, better and more public – with YouTube full of people finding extravagant ways to pop the question.

A man from Gloucester proposed to his girlfriend in November last year by getting a “Will you marry me?” tattoo with a ‘Yes’ or ‘No’ tick box for her to fill in. For him, his girlfriend said ‘Yes’ and ticked the correct box. 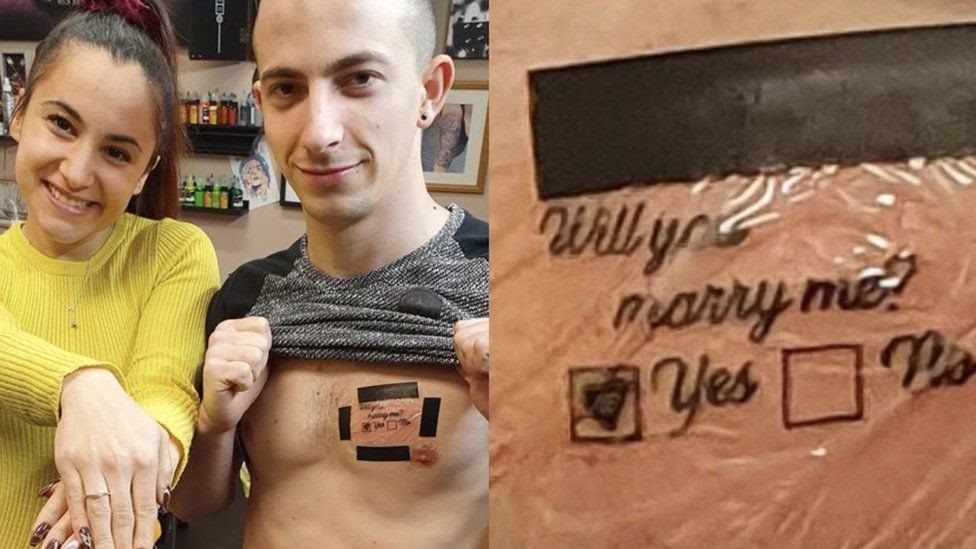 And finally, Nick Fenton from New Jersey proposed to his girlfriend Bridget Moore with a banner plane carrying the message “Briget will you marry me? Love Nick, she said “I do.”

Is it too much pressure?

We asked Bernadette Chapman, founder of The UK Alliance of Wedding Planners.

“It definitely increases the pressure. Personally I would hate a public proposal and I think most people would find it really embarrassing.”

However, she did like the idea of the Sleeping Beauty proposal.

“People who want to propose in public need to ask themselves are you doing it for yourself or are you doing it for the person to celebrate her or showing off to impress her? Ensure its risk free and if the ring falls can be easily retrieved in safe location without death. Don’t let the extreme desire to outdo others cause you to risk your life or be in danger. To propose is good stay alive to marry her.

A most elaborate marriage proposal ever?

2 thoughts on “A MARRIAGE PROPOSAL FILM”