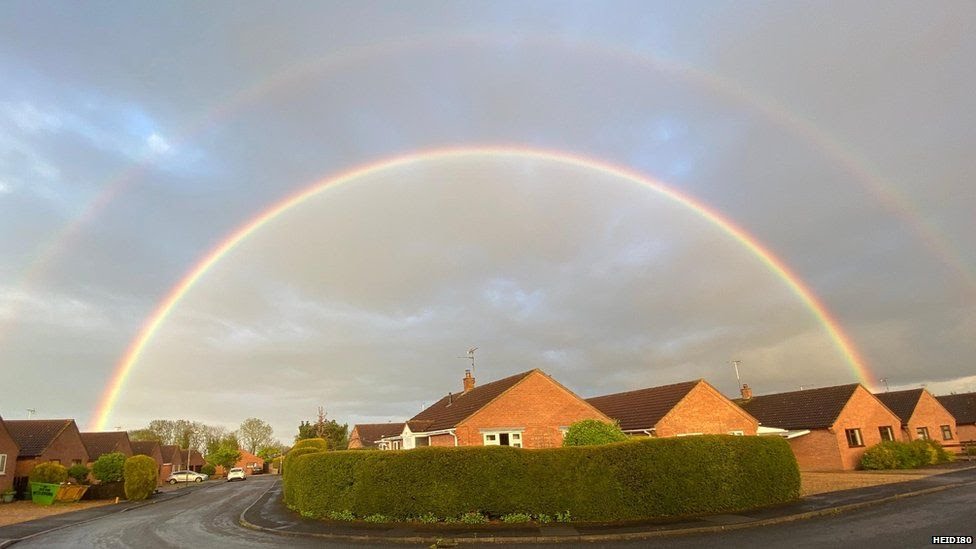 God’s Covenant double rainbow is seen across the sky as people applauded NHS and key workers on their doorsteps. The rainbow of God surrounding HIS throne significantly connects heaven and earth directly.  BBC Weather Watchers across England captured phenomenon which appeared in many parts of the country on Thursday evening continues today.

Happened as the residents took part in “Clap for Carers” weekly tribute to those working in the frontline of the Covid 19 pandemic. Rainbow became symbol of thanks to God and the key workers with many displaying homemade pictures in their windows. In some areas of country treated to double arches and the others spotted the vivid streaks of colours.

In Devon was beautiful rainbow arches appeared over the sea in Teignmouth.

The double rainbow appeared after the rainy end to the month, which had been sunny for the majority of lockdown.

On 3rd August 2019 God’s rainbow was revealed to me nearby childhood home window in a dream. Same week three people sent photos of rainbows near their homes and work place to confirm my dream shared with family, friends, colleagues and noted the date. I went online to find image closest to dream shared in a previous post. I understand children’s rainbow God’s Covenant sign like after Noah’s flood s sign of promise to mankind never to destroy by flood. It is homes built in flood plains or faulty dams, dykes, broken pipe, fracking and climate change torrential rain concrete floor land can’t absorb water destroys by the flood. God’s Rainbow in heaven connects to children’s rainbows on their windows. It is a miracle to realise true meaning of dream from God. Covid-19 it it is said started in September 20l9 in a month after dream. God was alerting us of events coming now fully understand as confirmed. God LOVES and CARES  deeply about all mankind and HE is not responsible for Covid-19. And God will comfort all in grief over lost loved ones and mete out justice to those killing HIS creation to control population God sees it all. Revelations 19:15-19 says Jesus will kill perpetrators in God’s wrath on judgement day. Make sure you repent so saved not to live next to perpertrators in hellfire. Rainbows remind us of God’s Covenant promise sign to save mankind so touches God’s heart to have mercy on nations in Jesus Name and shorten evil days. Pray God sends Jesus quickly in imminent rapture in cloud. Jesus said as it was in the days of Noah He will come to save those who believe in rapture to heaven. Other believers are left behind in great tribulation. Joel says people will dream dreams and see visions of God’s messages, prophecy in Jesus Name in the end times. Thank you God for your faithfulness we give you GLORY! Thank you Jesus for eternal life and Thank you Holy Spirit. Thank you God loves you.

Clap for carers: Crowds urged to stay away from Hull Royal Infirmary