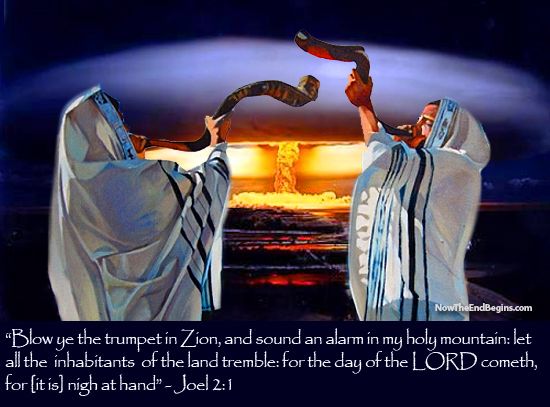 Jerusalem is mentioned 800 times in the Bible and was divided many times in the past. Jerusalem means “City of Peace,” but was destroyed, rebuilt, conquered, and re-conquered more times than any other city in living history. Jerusalem a city in Israel for several years divided between Israel and Jordan with the Old City on the Jordan side. In 1967, the Six-Day War led to the reuniting of the city under Israeli sovereignty. U.S. backed peace process seeks to split the city once again to divide Jerusalem so contentious issue in Middle East peace talks. Israel  maintains Jerusalem, eternal undivided capital. Palestinians want eastern part for the capital of a future state. Sadly Jerusalem will be divided according to the Word of God in Matthew 24:15 and Daniel 11&12. The attempt to RESTORE GOD’S HOLY TEMPLE MOUNT according to Daniel 9:27 to remove antiChrist’s  sacrilegious desolation desecration by a 7 year peace treaty causes Armageddon war.  Only when the children of Israel cry out to God then time comes for God to make HIS Move because God hears their groanings God Remembers HIS COVENANT with Abraham, Isaac, Jacob in Exodus 2:24 and delivers them as God did through Moses. God will send Moses again to help deliver Israel from oppression.  Circumstances cause God to act to carry out HIS purposes fulfilling HIS promises. So if suffering some sort of bondage or pain for what seems a very long time we can rest assured God hears our cries. HE remembers covenant in HIM through our Messiah Yeshua, providing a way out of spiritual bondage and into our inheritance if we accept Yeshua. God is TRUE to all HIS promises yet all still need to keep crying out to YAHWEH in Jesus Name for HIS deliverance waiting in faith and hopeful expectation to move on our behalf in spiritual or physical earthly afflictions.

God is not deaf or aloof to our suffering HIS ARM is not too short to save. Bible in Matthew 5:11-12 says, “Blessed are you when others revile, persecute and utter all kinds of evil against you falsely on my account.Rejoice and be glad, for your reward is great in heaven, for so they persecuted the prophets before you. So righteous cry out and the LORD hears them; HE delivers them from all their troubles says Psalm 34:17. The antiChrist  peace agreement with Israel will see the Temple Mount divided between Jews and Gentiles. This suggest Jerusalem will be divided as part of that agreement. The Bible says a reed like a measuring rod is used to measure temple of God and the altar with its worshipers. But excludes outer court not measured because it is given to Gentiles. They will trample on the HOLY CITY for 42 months in Revelation 11:1-2. The Restricted Temple Mount for 19 years divided before 6 days war wants the further division of Jerusalem. The forces of antiChrist will invade and capture whole of Jerusalem as God gathers all nations to Jerusalem to fight against city to be captured, houses ransacked and women violated. Half of the city will go into exile but rest of people not taken from city says Zechariah 14:2. Bible prophecy predict attempts of dividing Jerusalem in Zechariah 12:2-3. God will make Jerusalem a cup that sends all the surrounding peoples reeling. So Judah will be besieged as well as Jerusalem. On that day, all the nations of the earth will gather against her yet God makes Jerusalem an immovable rock for all nations. All who try to move it injure themselves. Jerusalem concerns all nations of world against Israel who want God’s Holy City divided. Prophecy says attempts to do so are unsuccessful so effort against Jerusalem Makes God YAHWEH intervene to save Israel.

In Zechariah 14:2 Jerusalem is attacked is final battle before the Lord returns. “I will gather all nations to Jerusalem to fight against it; the city will be captured, the houses ransacked, and the women violated. Half of the city will go into exile, the rest of the people will not be taken from the city.” This confirms prior to last battle Jerusalem is undivided. Based on prophecies hard to believe current talks to divide Jerusalem actually happens. If it does, Zechariah’s prophecy says it will be temporary. Jesus literally returns to earth to Mount of Olives in Jerusalem in Zechariah 14:4 at conclusion of Great Tribulation. The nations on earth will be judged for their conduct towards Jewish nation and for dividing of God’s Holy Land. God, will gather nations to the Valley of Jehoshaphat. And puts them on trial for what they did to MY inheritance, MY people Israel, they scattered my people among nations and divide MY land says Joel 3:2. God destroys the destroyers of Jerusalem spoil taken from Israel, divided land restored by the LORD God YAHWEH.  Redeemed Israel in the Past, Present and Future. God’s promises to Moses accomplished four redemptive acts: God brought out Israelites from suffering in Egypt, rescued from slavery, redeemed from oppression with outstretched arm takes them HIS own nation (I AM). Four promises or these Four Expressions of Redemption are commemorated during Passover Seder meal with four cups of wine. Acts of deliverance in Exodus 6:6–7, God used following Hebrew words: 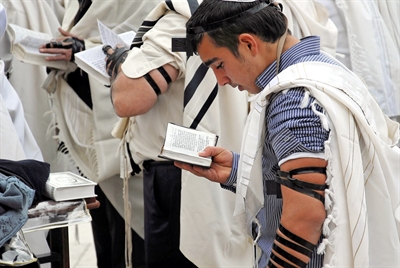 Jewish men wear tallitot prayer shawls pray with tefillin (phylacteries) and the siddurim (Jewish prayer books). So God  makes a fifth expression of redemption. HE promises to bring (heveiti הֵבֵאתִי)  HIS people back into their own land. I will bring [heveiti] Jews to the land I SWORE with uplifted Hand to give to Abraham, to Isaac and to Jacob. I give to you as your possession I AM the LORD in Exodus 6:8. So 2 thousand years ago, Jewish people lived in Promised Land, fifth expression commemorated during Seder the fifth cup of wine. God rescued Jewish people from exile back into their Land. Fifth cup represents the complete Redemption through Messiah Yeshua. It is this fifth cup at Passover Seder, called the Cup of Elijah, left untouched for the Prophet Elijah expected to return to the earth to herald the coming of Messiah and His Messianic REIGN. 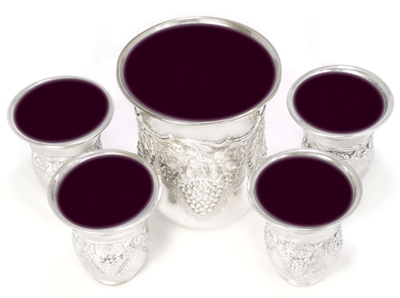 Five silver cups filled to brim with red wine during the Passover Seder, meal commemorates the Exodus redemption. The largest Cup of Elijah is untouched throughout the meal. Elijah and Moses are expected to come back soon to Israel to evangelise GOD’S people. God worked great salvation miracles through Elijah who never died and raptured alive in GOD’S golden chariot. Will collaborate with Moses who never entered Canaan promised land to help save countless multitudes in the end-times. When God speaks HIS Words are done as HE said HE will always do, be ready for God.

For God will gather the nations against Jerusalem to battle and the city will be captured, the houses plundered, the women ravished and half of the city exiled but the rest of the people will not be cut of from city. Isaiah 13:6 states, Wail, for the day of the LORD is near! It will come as destruction from Almighty God. Isaiah 13:9 says Behold, the day   of the LORD is coming, Cruel, with fury and burning anger to make the land desolate And He will exterminate sinners from it. In Joel 2:1, Bible says blow trumpet in Zion, sound the alarm on God’s HOLY mountain! Let all the inhabitants of the land tremble, For the day of the LORD is coming surely it is near says Zechariah 14:14. Judah will fight at Jerusalem and the wealth of all the surrounding nations will be gathered, gold, silver, garments in great abundance. The invaders will take spoil and rejoice for invading GOD’S people however, in the midst of their celebrations God will take vengeance on behalf of Israel. The attacks are to shake both the Jews and Gentiles in the whole world that God is restoring the earth as He planned originally. The events warn people about REAL LIFE changes taking place globally. GOD’S PLACES of RIGHTEOUSNESS and HONOUR will not be left or forsaken as God’s PRESENCE is ever before Israel.” Isaiah 4:5 says  the LORD creates upon every dwelling place of MOUNT ZION upon assemblies a cloud and smoke by day, and shining flaming fire by night for upon all the glory shall be DEFENCE. GOD’S GLORY, Jesus’ Glory, Children of God’s glory is not given to anyone else. Recently God sent HIS CLOUD over the nation to protect them from attacks. So will soon send YESHUA Rock of Ages to crush all enemies forever in Jesus Name for ETERNAL PEACE.

Although it seems these events centre around Jerusalem all nations are drawn into the conflict one way or another. Consequentially it is in the interest of everyone to make a right decision to be in the Good Book of God. Malachi 4:1 says, Behold the day is coming, burning like a furnace and all arrogant evildoers will be chaff; and the day that is coming will set them ablaze, says the LORD of hosts, so that it will leave them neither root nor branch. Behold, the day of the LORD comes, and your spoil shall be divided in the middle. Joel 2:31 and Acts 2:20 says, the sun will be turned into darkness and moon into blood before the day of the Lord. Joel 3:14 says multitudes multitudes, in the valley of decision for day of the Lord YAHWEH. Malachi 4:5 says Behold, God will send Elijah and Moses the prophet before the Coming of the day of the Lord God. Through Moses, God preserves HIS people but plagues and judgments called makot in Hebrew destroy enemies. God PROVED HIS position as the One True God of Abraham, Isaac, Jacob, so the gods of Pharaoh, Egyptians had no power over YAHWEH’S people. During the endtimes Moses again brings deliverance to Israel but destruction to God’s enemies. Bible warns the world to watch out for the end events happening unfolding right before these generation. So ONLY WAY ever to be peace in the Middle East is if Yeshua Jesus the Sar Shalom Prince of Peace is reigning in hearts and minds of the people and returns physically to live in Israel. So most crucial thing to do is belong to God personally and be saved in Jesus Name.