Jesus warned about end time events now unfolding in Israel concerning Jerusalem affecting the whole world in the Bible. So the world is changing fast towards final stages of Jesus’ predictions in the Bible. Due to the world’s refusal to repent God Almighty YAHWEH decided to force an action upon the whole world through Israel. By gathering together to form alliances targeting Israel, God Himself will intervene to save Israel. But wrath of God’s punishment takes place alongside the air rescue by Jesus Rapture. Then the Great Tribulation endtime is unleashed to fulfil the predictions in the Bible. Son of man, record this date, this very date, because king of Babylon laid siege to Jerusalem this very day in Ezekiel 24:2. On Tenth of Tevet on this day 2000 years ago, Yeshua Jesus celebrated this Biblical holiday of the 10th of Tevet, a Fast Day in Judaism. So  at dawn, observant Jewish people begin fasting, mourning, repenting as Asara B’Tevet the Fast of Tevet began Tenth of Tevet is the day the Jewish people remember Jerusalem under siege. At this time people ask God to have mercy and FORGIVE mankind for all evil in the world. The whole world is going through a situation under siege by the turmoils taking place globally. Though Israel is often under siege all countries who resent the presence of Jewish people in the Holy Land are affected. And she is feeling under siege by her closest allies since passing of the UN Security Council resolution day before Hanukkah began. This resolution effectively declares the Kotel Western Wall and Jewish quarter in Jerusalem to be illegally occupied territory, along with all of East Jerusalem and Jewish settlements throughout Judea-Samaria. Since the wave of terror began on Yom Kippur in September 2015, Israelis have been under siege by attackers. Israel, and the Holy Land is bracing for attacks the question is what is going on? Individuals addressing matters together must pray to ask God to SHORTEN THE EVIL DAYS TO MAKE JERUSALEM A PRAISE to all the nations. Ask God to be in God ‘s Good Book of life as you pray daily for the PEACE OF JERUSALEM. Peaceful citizens love peace and a peaceful life of joy. For believers Yeshua Prince of Peace will give PEACE of God beyond human understanding. So pray for the peace of Jerusalem as this impacts world PEACE.

Sadly increasing attacks around the world, in several Middle Eastern countries are still under siege. They are persecuted in many ways including the sanctions and boycotts of anti Semitism propaganda. Consequence of rebellion against God and disobedience to His Word is the reason for these events happening. God repeatedly sent HIS prophets to warn HIS people to repent and follow His ways.  Sadly the warnings went unheeded so LORD GOD their FATHER sent word to them again and again by HIS messengers, because He had compassion on HIS people and on HIS dwelling place but they continually mocked messengers of God, despised HIS words and scoffed at His prophets, until the wrath of the LORD arose against HIS people, until there was no remedy in 2 Chronicles 36:15–16. Peace for Israel means security for the whole world so stand with Israel to protect her right to exist   in territorial integrity. Israel is great outpost of God’s democracy in the world, marvelous example of what can be done so desert land transformed into oasis of brotherhood and democracy. Peace for Israel means security of reality of GOD’S KINGDOM on the earth says Martin Luther King, Jr. Yet constant financial pressure of defending attacks, threats of war due to worldwide BDS: Boycott, Divestment and the Sanctions movement Israel has the highest rate of poverty in the developed world. So most vulnerable especially the poor Holocaust survivors, tens of thousands live in deep poverty without enough money for food, shelter, and clothing. Do show them true Christian love before it is too late. Those who Bless Israel are BLESSED by God. Jerusalem during this Holy day, Jewish people consider the consequences of rebellion against God and disobedience to His Word, though majority will not understand Yeshua Jesus paid the price for our sin. The day is near when God will pour out the Spirit of Grace on HIS people and they will understand Yeshua is the MESSIAH says Zechariah 12:10–14. According to Bible prophecy, that day, the fast of Tevet will be transformed into a festival of joy. This is what the LORD ALMIGHTY Says: ‘The fasts of the fourth, fifth, seventh and tenth months will become joyful and glad occasions and happy festivals for Judah.  Therefore love truth and peace in Zechariah 8:19. It is crucial each person makes a personal decision to belong to God in Christ to be saved. Believers in Yeshua can rejoice in the forgiveness of sins. In Christ we have redemption through His blood the Forgiveness of sins in accordance with the riches of God’s GRACE lavished on us in Ephesians 1:7–8. So On the Tenth of Tevet the Jewish people fast because of Siege of Jerusalem great tragedy caused by sin and rebellion. Please support Israel and help share the Good News in Israel on this fast day of Tevet so many will be helped to find a new beginning in the Lord and their mourning will turn to rejoicing. Jesus will rule the world from Jerusalem so get ready for His Coming.

“Let them construct a sanctuary for Me, that I may dwell [shakan] among them.”  (Exodus 25:8; see also Exodus 40:34–35 and 1 Kings 8:11. This dwelling (shakan) forms related word Shekhinah, which is not found in the original Hebrew Bible, but it is used in rabbinic literature and Bible translations to describe the Lord’s Divine Presence. The Prophet Ezekiel witnessed departure of Divine Presence from Temple in Ezekiel 10:18–19. But he also saw the rebuilding of an eternal and permanent dwelling place of God on the Temple Mount in Holy City of Jerusalem. The GLORY of the Lord entered the temple through the gate facing east…  I heard someone speaking to me from inside the temple.  He said: ‘Son of man, this is the place of MY THRONE and the place for the soles of my feet.  This is where I will live among the Israelites forever in Ezekiel 43:4–7. Many peoples will come and say, ‘Come, let us go up to the mountain of the LORD in Isaiah 2:3. Hebrew prophets proclaimed in the last days, the exiles of Israel would return to the Promised Land and that the Temple would be rebuilt. And the Lord said, “Then the nations will know that I the Lord make Israel holy, when my sanctuary is among them forever in Ezekiel 37:28. After defeat of anti-Christ YAHWEH and Christ will walk about in Jerusalem. These Biblical  phenomenal end-time events are unfolding before our very eyes! So the question must be asked for whom is the next Temple really being built? 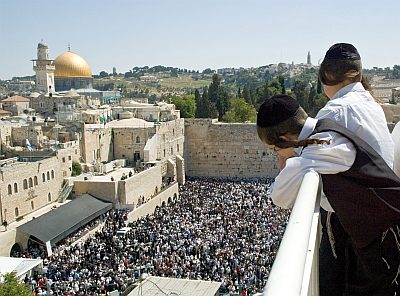 For centuries, the Jewish People have streamed to the Western Wall, which came to be known as the Wailing Wall, to lament the destruction of the Temple, to pray for the rebuilding of the Temple, to receive priestly blessings, and to repent.  The Prophetic Return to Israel and the Third Temple is at the centre of the conflict over the Temple Mount.  Some skeptics around the globe think God rejected the people of Israel and that Israel has been rebirthed by man alone.  We find in Scripture God never intends to reject HIS people forever, You Israel, My servant, Jacob whom I have chosen, Descendant of Abraham My friend, you whom I have taken from the ends of the earth, and called from remotest parts and said to you, ‘You are My servant, and I have chosen you and not rejected you says Isaiah 41:9. God always planned to bring the Jewish people back to the Land on His terms, not man’s.  And as prophets foretold the Jewish people are returning to the Holy Land from the four corners of the earth after 19 centuries of global exile: I will bring back my exiled people Israel and rebuild the ruined cities and live in them.  They will plant vineyards and drink their wine; they will make gardens and eat their fruit. I Will Plant Israel in their own land never again to be uprooted from the land I gave them according to Amos 9:14–15.

Not only are the exiles of Israel returning to the Promised Land, but preparations to build Third Temple are progressing through efforts of Temple Institute and the Temple Mount Faithful Movement. God, Jesus, saints and heaven is coming to dwell in Jerusalem. So these things going on triggers conflicts because thought of demolition of one structure to be replaced by another causes anger and rage among the parties involved. History shows that both feel strongly entitled to exactly the same spot of plot of land of Mount Zion so defend it rigorously. The conflict stretches to many generations so each side is convinced is absolutely right in the matter. This is when Elijah comes back physically to confront people again to challenge them to choose to follow the REAL LIVING GOD TO CALL UPON HIM TO ANSWER BY FIRE. The Spiritual battle stage set is being prepared to decide once and for all TRUE OWNER OF MOUNT ZION. As in the Carmel Contest the ARMAGEDDON battle frontier is being prepared for the final count down so the RIGHTFUL PATENT OWNER GOD to claim it. These are the days of Elijah when Righteousness is being RESTORED so Elijah and Moses as the two witnesses will join 144,000 male Jews to evangelise Israel. All parties must call upon God for final verdict conclusion of this matter to settle dispute over Mount Zion once and for all. Gideon once destroyed and erased groves of his forefathers in Obedience to God. He had the audacity to stand up boldly to sacrifice sacred cow requested by God on the New Altar for YAHWEH. Gideon entered into a New Covenant so his people were not amused. They wanted to kill him for obeying God but Gideon gave them a wise advice, he told them leave the action to their god to fight for them. Like King David, Elijah, Moses and Gideon knew the battle is the Lord’s to fight with the Heavenly hosts to defend His people. Israel is not fighting flesh and blood but principalities and spiritual wickedness in high places. This is the reason behind what is happening and God has warned about these events taking place. The whole revolves around Israel and God Said, nobody on earth will survive if HE DOES NOT SHORTEN THE EVIL DAYS. YAHWEH Said, Give HIM NO REST DAY OR NIGHT UNTIL HE MAKES JERUSALEM A PRAISE TO THE NATIONS.

Without question, the most important political and prophetic issue of our day is: what we should do in regards to the nation of Israel? It is a crucial question that each of us faces. It is a crucial issue in capitals and boardrooms and churches and homes across the globe. It is the great and vital choice that faces you and me today. God is looking for people to stand with Israel. The governments around the world are turning against the Jewish state and putting themselves and their people on a pathway to judgment and destruction. I wrote Stand with Israel to open the pages of Scripture and unveil the truth behind the news that makes the headlines. I believe every friend of Israel needs to read this book and share this crucial truth with others. Chapters include:

Get your copy of Stand with Israel today with your gift of $20 or more (was $30) to support the work of the Jerusalem Prayer Team to bless, encourage, and defend God’s Chosen People in this prophetic moment.

view this email as a web page, click here