Bible in Daniel 5 says king Belshazzar made a great feast for a thousand of his lords, nobles and drank wine presence of a thousand.2 While drinking the wine Belshazzar commands to bring gold and the silver vessels Nebuchadnezzar took from temple in Jerusalem. The king and his lords, his wives, and his concubines to drink from them. 3 They brought the gold vessels from temple of the house of God in Jerusalem; and the king and his lords, his wives, and concubines drank from them. 4 They drank wine praised gods of gold and silver, bronze and iron, wood and stone. 5In the same hour the fingers of a man’s hand appeared and wrote opposite the lampstand on the plaster of the wall of the king’s palace; and the king saw the part of the hand writing. 6 Then the king’s countenance changed, and his thoughts troubled him, so the joints of his hips were loose and his knees knocked against each other. 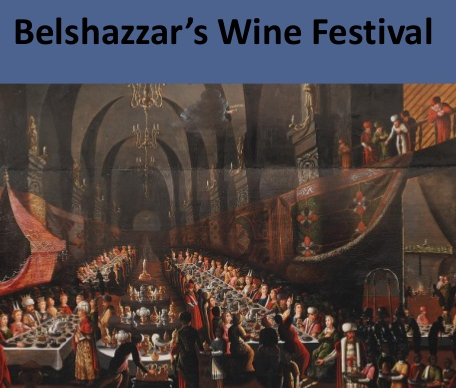 7 The king cried loudly to bring in the astrologers, Chaldeans and soothsayers. The king spoke to wise men of Babylon, “Whoever reads this writing, and tells me its interpretation, shall be clothed with purple and have a chain of gold around his neck; and he shall be the third ruler in the kingdom.” 8 Now all the king’s wise men came, but they could not read the writing, or make known to king its interpretation. 9 King Belshazzar was greatly troubled, his countenance changed and his lords astonished.  10The queen, because of the words of the king and his lords, came to the banquet hall. The queen said ‘O king live forever! Do not let your thoughts trouble you or let your countenance change.11 There is a man in the kingdom who has Spirit of Holy God. In days of your father his understanding and wisdom unlike wisdom of gods was found in him. King Nebuchadnezzar your father made him chief of magicians, astrologers, Chaldeans, soothsayers. 12 Has excellent spirit, knowledge, understanding, interpretes dreams, solves riddles, explains enigmas. Daniel named Belteshazzar be called give interpretation. 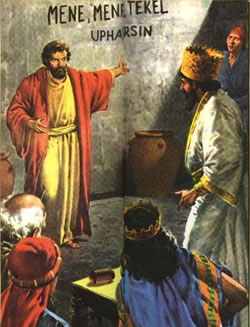 God’s Writing on the wall was explained to the king 13 by Daniel brought before the king. The king said to Daniel, “Are you Daniel one of the captives of Judah my father the king brought from Judah? 14 I heard of you, that the Spirit of God is in you, and light and understanding and excellent wisdom are found in you. 15 Now the wise men, the astrologers, have been brought in before me, that they should read this writing and make known to me its interpretation, but they could not give the interpretation of the thing. 16 I have heard you can give the interpretation and explain enigmas. If read the writing and make known to me interpretation will be clothed in purple and chain of gold around your neck and shall be the third ruler in the kingdom.” 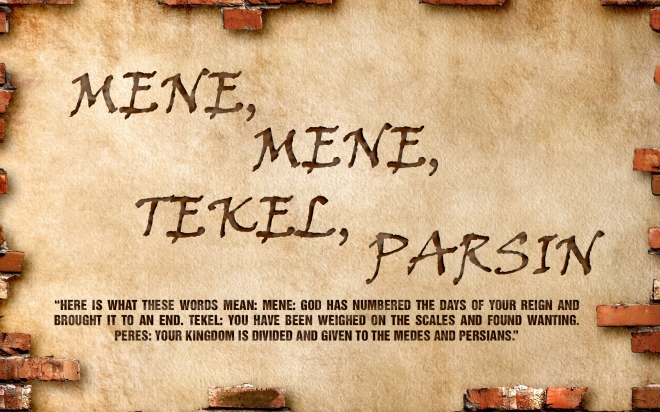 17 Daniel answered and said before the king, “Let your gifts be for yourself, and give your rewards to another; yet I will read the writing to the king, and make known to him interpretation. 18 O king, of Most High God king Nebuchadnezzar your father kingdom had majesty, glory and honour. 19 And because of majesty God gave him over all peoples, nations, languages trembled was feared. Whom he wished he executed; who he wished, he kept alive; who he wished he set up and whomever he wished, he put down. 20 But when his heart was lifted up, and his spirit was hardened in pride, he was deposed from his throne so God took his glory from him. 21 Then he was driven from sons of men, his heart was made like beasts, and his dwelling was with the wild donkeys. They fed him with grass like oxen, his body wet with dew of heaven till he knew the Most High God Rules in kingdoms of men, and appoints over it whomever He chooses.

22 “But you his son, Belshazzar, have not humbled your heart although you knew this. 23 And you lifted yourself against the LORD of heaven. They brought the vessels of HIS HOUSE to you and your lords, your wives and concubines and drunk wine from them. And you praised the gods of silver and gold, bronze, iron, wood and stone, which do not see, hear or know. God who holds your breath in HIS HAND owns all your ways you did not GLORIFY. 24 HIS FINGERS, HAND WROTE ON WALL. 25 “MENE, MENE, TEKEL, UPHARSIN. 26 Interpretation of words are, MENE: God numbered your kingdom and finished it; 27 TEKEL: You have been weighed in the balances, and found wanting; 28 PERES: Your kingdom divided is given to Medes and Persians  29 Belshazzar gave command and they clothed Daniel with purple, put chain of gold around his neck by proclamation is made third ruler in kingdom.

30 That very night Belshazzar, king of the Chaldeans, was slain. 31 And Darius the Mede received the kingdom, being about sixty-two years old.